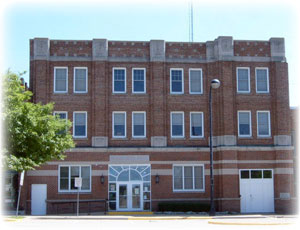 Berlin City Hall is located downtown, on the square.

History: Prior to 1928 city hall was located in various downtown buildings on their second floor offices including above the First National Bank in 1904.

In 1928 it was deemed appropriate to build a municipal building on the spot where the then current firehouse stood on Market Square . The current City Hall building was built and dedicated with much fanfare, including a song written about it in 1929. The original building had a tower on the south end but due to an engineering mistake it was deemed unsafe and removed in 1942. It housed city offices, the police department and the fire department. In 1982/83 the fire department moved to its own building and the remaining space was remodeled into more space for the remaining departments. The auditorium on the second floor was remodeled to hold the new Council Chambers. The building has received subsequent upgrades since then. It currently houses the police department, city offices and various department offices.

Click here to Check Your Voter Information at myvote.wi.gov

You must reside at your current residence in the City of Berlin for at least 28 consecutive days immediately preceding the next election to vote.  It is necessary to bring identification with your current City of Berlin address such as Wisconsin Driver’s License, Wisconsin ID, Bank or Credit Card Statement, Utility Bill, Paycheck, Student ID, Government issued Document, Lease Agreement, Employee ID, Residential Care intake document, Real Estate Property Tax Bill or Receipt.

Voters are allowed to cast their ballots prior to Election Day, either by mail or in the City Clerk’s office at 108 N. Capron Street.  You must provide an acceptable photo ID in order to vote.

The City of Berlin is always looking for individuals who would be interested in being a Polling Place Election Inspector.
Wisconsin law permits high school students to work at the Polls on Election Day.  If you are interested in knowing more about becoming an election worker, please call the City Clerk’s office at 920-361-5400.